is Excellency, Urbane Angelus, has graciously consented to accompany us on this blog as we address multiple issues in the religious world today. His Excellency is the Titular Archbishop of Atoll #7 in the Pacific Ocean. He will help by way of commentary and illustration of what it is like to inhabit an elevated position in the Roman Catholic hierarchy and on hierarchical interpretations of moral and doctrinal issues. 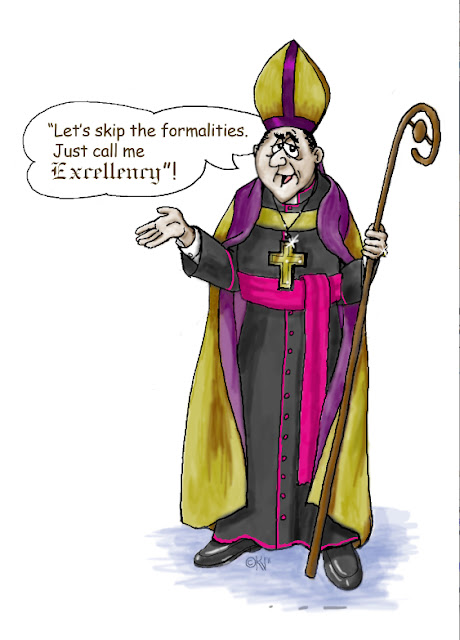 We begin with some of the problems for which we will seek causes. Having found the causes, the solutions will appear:
1.  A 2008 study by the Pew Forum on Religion and Public Policy found that adult Catholics in the United States who have exited the Catholic faith number 22.8 million. The study found that 68% of those raised as Catholics have stayed in the Church.
We ask: what could cause such an exodus?
2.  Over the past decade it was suggested at the United Nations that there should be one world religion. The Roman Catholic response by Cardinal Arinze amounted to “That’s fine, as long as the one is Roman Catholic.” Similar responses came from other world religions.
Twenty years ago, theologian Hans Kung wrote in his work “Global Responsibility

” that the enmity between religions reaches into the political sphere and prevents people from coming together. “There will be no peace,” he said, “until there is peace between religions.” He proposed that the way to achieve that peace would be for those religions to come together and reach an agreement on a common or shared ethic.
We ask: why don’t they come together? Doesn’t the basis of a common ethic already exist in the shared belief in the golden rule: love your neighbor as you love yourself?
We ask: where are the bishops in the peace effort?
3.  In this century the time bomb of clergy sexual abuse exploded with nuclear force. Subsequent investigations have revealed the worldwide extent of the abuse. They also revealed the behavior of bishops in their handling of priest abusers and the scandal. Bishops routinely stonewalled victims and the victims’ parents. They used attorneys to play hardball with victims. They used the common lie that “this was the first complaint ever received against Father Pedophile.” They transferred pedophile priests from parish to parish, diocese to diocese, where other children awaited the horror to come.
We soon heard a litany of excuses from the bishops as they pointed the hierarchical finger: they said gays were responsible so they mounted a campaign against gays saying they should not be ordained; they said that children can be very seductive tempters and temptresses. It was the children’s fault. The abusers were the real victims; they implied that the victims want the money that would otherwise go to the poor, as if it’s okay to work an injustice on one group as long as charity prevails for another group.
We ask: What explains this behavior of the bishops? And why did the recent John Jay College of Criminal Justice study (commissioned by the bishops) fail to detail the bishops’ own behavior in the scandal?
4.  A number of issues have emerged that illustrate a growing dissidence between the Catholic laity and the hierarchy: the role of the laity, sexual morality, the rights and place of women, married and women priests, contraception, and divorce – to name only the more apparent.
We will begin to tackle all of the above in the next and subsequent issues. We believe that the ultimate answer lies with the clerical culture at the episcopal level, and we will begin with a history of that culture’s development. We plan to publish weekly – given the availability of Archbishop Angelus. Thanks for visiting. We hope you will follow us as we progress.

by Doyle, Sipe and Hall

Global Responsibility: In Search of a New World Ethic

Posted by Stephen Boehrer at 8:07 AM 0 comments