he aristocratic purple culture of the bishops has become a prime moral and doctrinal principle in their consciousness. Anything that seems to threaten the ordering of society according to that culture is immediately assumed by them to be an attack on God and on the gospels. They truly believe that the privileged status and absolutist authority they assert for themselves are God’s will. It follows that any danger to that status (they will say, danger to the Church), is defended with righteous indignation, and with any weapons at their command ranging from slander to excommunication. 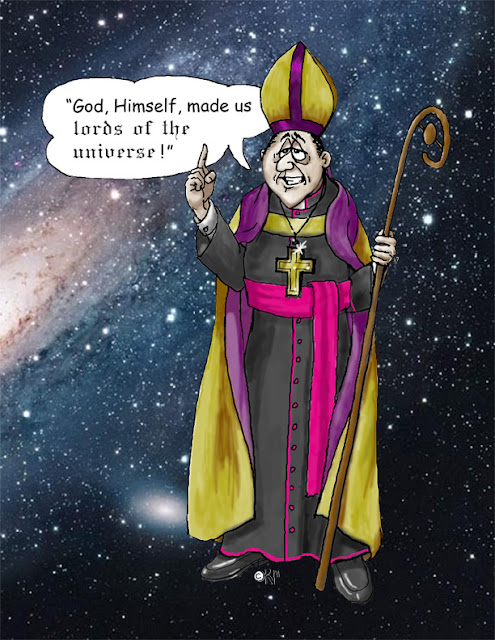 Astonishingly, they seem to have no problem in either ignoring the servant leadership commanded by Jesus, or in somehow identifying servant leadership with aristocratic domination.
However, people today are no longer uneducated. We question many things, even matters we assumed were accurate because we heard them from people to whom we were taught to accord authority. When flaws and inconsistencies appear in the life and dictates of those authorities, we question even more. And when our questioning leads us to see that our authorities are neither so knowledgeable or pure of heart as we had been raised to believe, our next step is to leave those authorities without authority. “Do it because I/We say so” no longer carries the force it once had, nor does it carry the feelings of guilt that were once such an integral Catholic trait. The Catholic populace is beginning to formulate a Catholic conscience that is their own in every way.
As we noted in the first issue of this blog, nearly one third (22.8 million) born and raised Catholics have left the Church. Over nine million of them are not affiliated with any Church. Over ten million have joined various protestant denominations. Over two million have joined other religions. The majority of those who left did so before reaching the age of twenty-four.
Our bishops like to explain these departures as the result of external cultural realities, the nebulous isms: indifferentism, materialism, individualism, relativism, etc. The current papal and Vatican buzz word for enemy is relativism, the mind-set of those who hold that judging doctrinal and moral matters is relative to the people, events, conditions etc. involved in a particular matter. A friend of mine recently quipped: “In their world, everything is relative – to them.” Neither the Vatican nor the bishops around the world seem capable of looking at the components of their own culture as a major disconnect with both the Catholic laity and the Jesus of Scripture.
Posted by Stephen Boehrer at 12:01 AM 1 comments