Love Struggles for Primacy in the Church

hat happened to the standard (love of neighbor) set by Jesus as the identifying hallmark for his followers?  The law of loving others was replaced early in the Church’s history, but a contemporary illustration will help us understand exactly what happened.
Peter Hebblethwaite, in his biography, Paul VI – The First Modern Pope, relates the following: In July 1967 Pope Paul VI welcomed the Ecumenical Patriarch, Athenagoras II, to the Vatican. “Paul insisted on no title other than the primacy of charity.” In his comments “Paul quoted his patron: ‘Be eager to give one another precedence.’” (Romans 12:10). “Among Athenagoras’ suite was the Metropolitan Meliton, his chief theologian, who dangerously remarked, ‘Paul VI has made the papacy out of date,’” meaning that Paul had changed the primacy from the papacy back to love.
One can easily imagine the consternation those remarks brought to members of the curia for whom the primacy belonged to the Pope – and derivatively to themselves. The incident was among other omens of the coming Vatican retrogression from the advancements made at the Second Vatican Council.
The example is poignant in that it illustrates the placement of primacy by members of the Church’s purple culture onto a particular person and not on the intention and purpose of the “way” movement begun by Jesus. Loyalty to monarchical personages had long before assumed the priority over love of neighbor. To maintain this altering of primacy down through the centuries, practices were introduced that in effect supported this substitution of the true primacy. Chief among them were laws promulgated to change the spiritual focus of members. No longer were we freed from laws as Jesus and then Paul declared, but were subjected to ever increasing obligatory practices.
Even non-obligatory practices were exalted and substituted for response to God in place of love of neighbor: devotions to saints (a number of whom were designated as patrons, converting heaven’s culture so that it replicates the patronage system of the purple culture), the rosary, pilgrimages, etc. Bishops, drawing on their own need for admiration, presented God as demanding attention rather than a God who loves and nourishes. Christ present in the Eucharist has been presented as one there to be acclaimed rather than as someone there to nourish our journey. All of these practices are good and valuable only if they contribute to our ability to love our neighbor. If they don’t, they are at best irrelevant. If they are substitutes, they totally miss the mark. 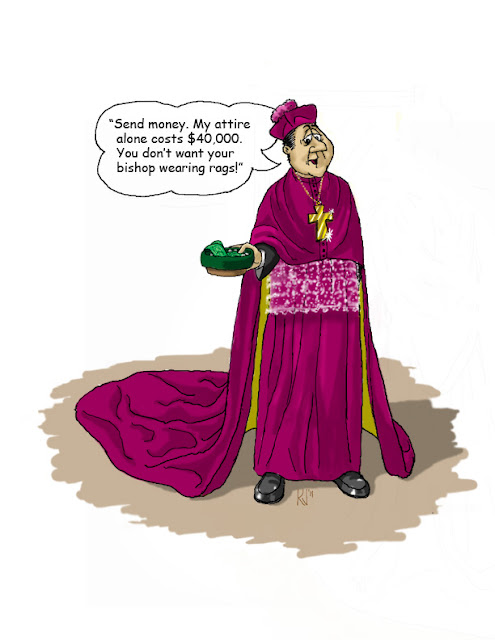