Women Priests: The Time Has Come

s we noted in treating the French Revolution, the
Declaration of the Rights of Man and of the Citizen of 1789 defined equality: “the law must be the same for all, whether it protects or punishes. All citizens, being equal in its eyes, shall be equally eligible to all … employments according to their ability, and without other distinction than that of virtues and talents.” One cannot get more pointed and straightforward than that.
Sixth graders understand the definition and concur with it. If you ask sixth graders why does the Church have seven sacraments for men and only six for women, they instantly get the point. Women have only six sacraments because they are barred from the sacrament of ordination. They are not allowed in the diaconate or the priesthood. The sixth graders’ eyes get wide at the realization and they burst out: “That’s not fair! That’s not equal!”
The bishops don’t get it and should take a lesson from the sixth graders. Pope John Paul II expressly forbade even discussion of women’s ordination. Of course, that prohibition failed to stop discussion.
When the bishops try to justify patriarchy in the Church, they usually descend into triteness: “Jesus didn’t have women apostles,” omitting the fact that many of Jesus’ closest disciples were women, forgetting the male-dominated culture of Jesus’ times, and forgetting that Paul used the term apostle for Junia (a woman) in his epistle to the Romans. We might remind the bishops that Jesus didn’t establish a monarchy, though popes and bishops have no problem with affirming that he did.
The point is simple. It is impossible to argue that equality for all humans, male and female, is not a moral imperative. It’s time our bishops acknowledged this fact and argued the truth at the Vatican.
It is clear though, that we have no bishops who are courageous enough to act counter-culturally within the purple culture, even collegially. They are inhibited from doing so by fear of personal consequences and/or by the cultic structure of their culture, and by its innate narcissism.
Women are being ordained in our times without the approval of either the Vatican or the bishops. They are the forefront of more to follow. They are working in ministry, often with married male priests. Seventy percent of us, the laity, agree that this should be a permanent reality. When you meet these brave women, acknowledge their prophetic role and support them. 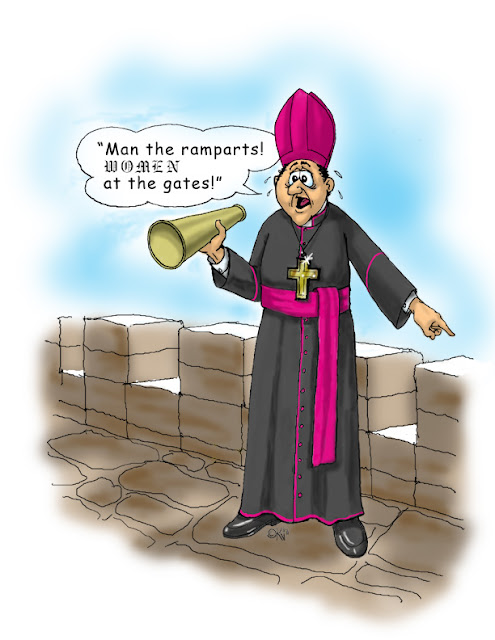