e have seen how and when bishops took for themselves the style and purple culture of the aristocracy, and how that culture is now totally integrated within the episcopacy. In the next few issues we want to describe relevant components of that culture as it exists today, and as it impacts on the matters mentioned in the first issue of this blog, matters important to the laity and to their sense of participation.
First of all, any culture has many addictive attributes. We float in our culture with only rare consciousness of it. It inhabits us and we act or don’t act out of it without awareness of our non-reflection on it. We assume, again non-reflectively, that the culture that supports us is the best culture in the world. An analogy of culture is easily seen in a common science lesson: If you throw a frog into boiling water, it will immediately jump out and save itself. If, however, you put that frog into water at room temperature and then bring the water to boil, the frog won’t realize what is happening and will perish. The latter example perfectly describes culture.
Experts tell us that addictions can be either substance addictions (drugs, alcohol, etc.) or process addictions (gambling, sex, work, religion, etc.). Addictions seize control over one’s life and the addicted person needs outside help to regain their life.
Cultural anthropologists and psychotherapists agree that organizations can be addictive and that the addiction extends to the particular culture of the organization. The episcopacy is easily compared to a corporate entity, and just like that of any corporate entity, the culture of the episcopacy is addictive.
Within the organization the message goes out that the organization (episcopal culture) comes first. The priority given the episcopal culture leads to an attempt to control everything and everyone in the organization. An insider of the culture does not question the culture and the policies that support it. The sense of interior perfection also prevents insiders from accepting wisdom from the outside. We will see the cultural consequences of denigrating and ignoring intelligence from the laity as we progress through each of the components of the bishops’ culture.
The bishops’ unique form of denial, the common defense mechanism used by addicts to protect their addiction, is best found in their use of Scripture. They project their culture as coming directly from Jesus, a fantasy drawn and expanded beyond any rational recognition, to “prove” that He founded a monarchical church: “You are Peter, and on this rock I will build my church.” (Matthew 16:18). But, as we have seen, the monarchical structure of the Roman Catholic Church had its beginning only four centuries after Jesus. The monarchical culture with its class separations came into existence and embedded itself thoroughly into the daily details of the church only from repeated unfounded affirmations, evasions and lies, the common tools of addicts.
Our bishops live in an addictive cultural box. 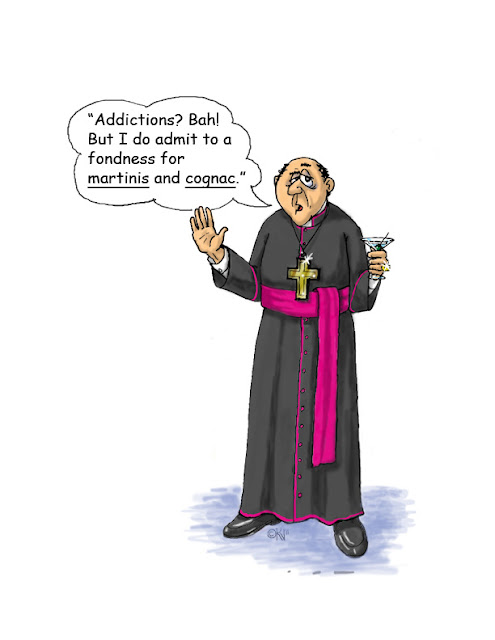 Posted by Stephen Boehrer at 12:01 AM 2 comments