Waiting for Grace: The Only Way Out of the Cultural Box That Imprisons Our Bishops

either the French and American revolutions, nor the current sexual abuse scandal of priests and bishops has been horrific enough to make the bishops of the world take a studious and professionally led look at the culture they inhabit. Buoyed by the innate narcissism of the culture, and hesitant from fear of those above them in the clerical pecking order, they deny to themselves and to the world that they have a problem.
There are two events that might be forceful enough to bring them to see themselves as they are: an overwhelming influx of grace or the departure from the Church of the wealthy. The wealthy won’t leave, as they have replaced the old aristocracy in the bishops’ eyes, and because the bishops honor and support the values and status of the wealthy, and court them. Recent studies have shown that the majority of wealth in the United States is held by one percent of the population, and that merely four hundred households have greater assets than fifty percent of all households in the country.
We hear bishops utter an occasional plea for the poor, but, while they can hurl excommunication and refusal of the sacraments to those who are pro choice in the matter of abortion, they simply have no stomach, on present course, to put such teeth into demands on those who deal death through poverty-caused lack of food, shelter, health care and the like. A sensible and justice-driven sharing of the world’s goods is beyond the ken of both bishops and the majority of those holding wealth. Any suggestion that there is enough for all, if shared, is met with cries of socialism or communism. Both “isms” carry the imposed stigma of being either anti-capitalist or atheistic. 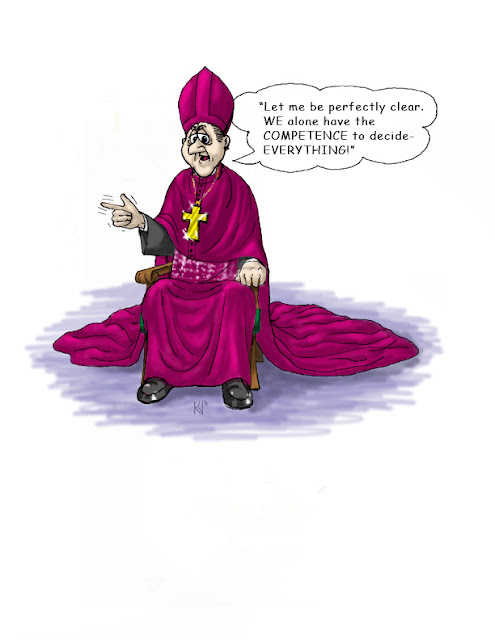 Those with wealth who claim to be Christian, along with our bishops, should read and ponder the structure of the original Christian community:

Those who believed shared all things in common; they would sell their property and goods, dividing everything on the basis of each one’s need. They went to the temple area together every day, while in their homes they broke bread. With exultant and sincere hearts they took their meals in common, praising God and winning the approval of all the people.” (Acts 3:44-47)

Since we cannot expect the bishop/wealthy tie to disintegrate, we are left with the hope for a giant infusion of grace to enlighten our bishops to flee their cultural box. Pray for our bishops. We should never give up hope. Grace abounds and can bring about a Catholic leadership that responds to the wisdom of the laity. Today’s bishops are not evil men. They are prisoners of a culture that oozes evil if the culture itself is endangered. To our bishops, serving the culture is serving God.
Posted by Stephen Boehrer at 12:01 AM 2 comments