Romancing the Aristocracy by Tweaking the Christian Message

We are looking at how the Church lost its egalitarian foundation, and we are still looking at the fourth and fifth centuries.  Bishops and emperors worked together to convert the Roman Senatorial Aristocracy.
We will look first at how the bishops responded to the task.
In short, they shaped the Christian message to appeal to aristocrats and their status concerns. Honor is the key element. Honor derives from leading the Christian life, and the Bishops claimed that ecclesiastical offices bring greater status and honor than do secular offices. 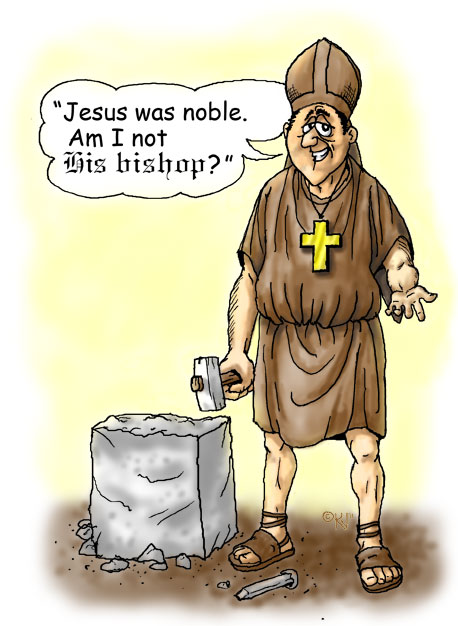 Friendship was brought into the Christian context.  Friendship furthered spirituality.  However, they did not make friendship a relationship that went beyond the status group.  It was confined to the group and fostered honor as always.  It was not preached as an egalitarian relationship.  It was not exhibited as a friend is a friend for the sake of a friend as Socrates defined it.  It was not Jesus saying, “I call you friends because I have taught you all that the Father has taught me.”  It remained a self-directed honor that flowed from the quality of one’s friends.


Wealth was also defended from the vantage point of the honor it could bring. We hear St. Ambrose saying, “There is no crime in being rich, only in not employing one’s wealth in proper fashion.” Wealth could be used in charitable causes and thereby bring honor to the donor.  Patronage brought honor, whether from representing notable clients in the Senate or from efforts such as building a church.  Paulinus of Nola, a bishop, preached that the poor “will place you above their own children, they pray for you, in all of the public places they acclaim you.”


Being recognized for possessing an intellectual culture conveyed honor to an aristocrat.  Christian preachers boasted that their literary culture was as old and as prestigious as any of their pagan contemporaries.  After all, they possessed a religion of the Word.
Pagan Priesthood was often sought for by members of the aristocracy for the honor it brought.  Bishops touted the superiority of the Christian priesthood.  Nobility, which came with high office or from high birth, brought honor.  Christian leaders pointed to Christian piety as providing greater nobility.  However, the examples they pointed to were men and women of the aristocracy.
In brief, all of the cultural value components of the aristocracy became part of the Christian vocabulary. The Christian message had been tweaked to lure aristocrats into the Church.
Next week, we look at the contributions of the emperors in attracting aristocrats to Christianity.

The Making of A Christian Aristocracy