n a moment seemingly graced with both arrogance and a peoples’ cry for salvation security, Pope Pius IX declared himself and all popes to be infallible in matters of faith and morals. The declaration flaunted centuries of inquisition-caused murder, centuries of witch burning, centuries of wars and crusades, and centuries of papal self-indulgence. As we noted before, the declaration also established a new form of monarchy for the Pope just as the Papal States were being wrested from his control.
But, the declaration did even more than that. It also put a padlock on the episcopal cultural box. As time passed, the sense of infallibility crept beyond its original, somewhat limited, intent. It extended its tentacles far beyond relevance. It made itself felt at every level of the Church from the papal halls to the smallest remote parish. It eventually reached into every possible concern of the clerical estate. By intimation, bishops appropriated it in their most inane and mundane utterances, and priests too often assumed its mantle on their own shoulders, both in their speech and in their demands for deference and privilege.
We find the shadow of infallibility alive and well in the purple culture today. It works on both pope and bishops to incapacitate their ability to admit mistakes and errors. Teachings that were uttered by the “Fathers” of the Church in the early Christian centuries were often based on a limited understanding of the universe, a limited understanding of Sacred Scripture, a limited understanding of human biology, and a limited understanding of human psychology. Pope John Paul II blamed theologians for the condemnation of Galileo–four hundred years after the event and after the world knew that the earth orbits the sun, not the other way around.
We find shades of infallibility in their inability to show genuine remorse to victims of clerical sexual abuse, and in their ongoing attempts to prevent justice being done for the victims. They point fingers at irrelevant causes. Perhaps above all, we find it in their inability to give hearing and credence to the laity’s wisdom in matters of faith and morals. We find it in their removed and incestuous thinking that they alone have the authority to dictate values in moral matters, and that authority somehow equates with competence. 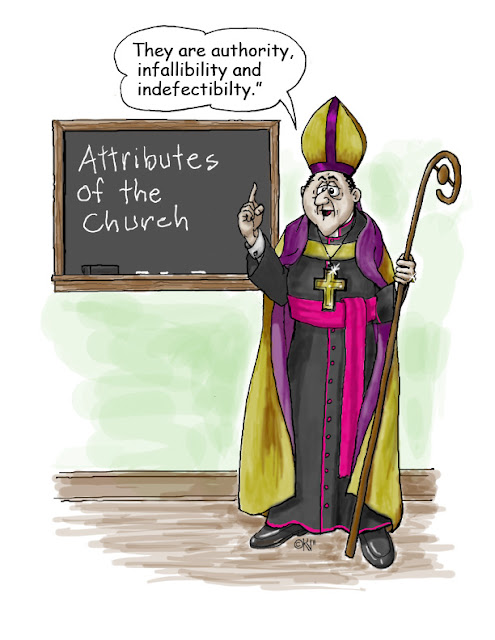