oday we take a look at a more serious implication of the monarchical structure of our Roman Catholic Church: the relation of monarchy to cult, and the consequent relation of cult to its members.
Monarchy is easily understood as the prime paradigm of a cult. A cult is always centered around a living leader who requires absolute submission. Questioning and dissent are forbidden, and violations of either are quickly met with immediate consequences including marginalization and/or expulsion.
An example of marginalization toward a member bishop is the case of Archbishop Hunthausen of Seattle, Washington. Cardinal Ratzinger (Now Pope Benedict XVI) of the Vatican Curia subjected Archbishop Hunthausen to a humiliating investigation, and for a time took away much of his authority with the appointment of a coadjutor archbishop. The investigation centered around progressive perspectives that Hunthausen held on moral issues: e.g., women’s role in the Church; use of married priests; ministry to lesbians, gays, bisexuals and transvestites; justice and peace; group confession, etc.  Hunthausen retired in 1991.
A cult presents itself as special and elitist. We saw this when we presented the narcissism native to the culture of bishops. In a cult, behavior of members is controlled, sometimes to the minutest detail. By custom; insertion of fear by the Curia; controls at every level of behavior; and by their own timidity in the face of danger to their status, bishops have no stomach for straight talk or argumentation on moral or doctrinal issues with the Vatican power base. The thought of representing the wisdom of the laity on a host of issues is frightening to bishops and they cannot entertain the idea, even collegially.
The cult structure of the episcopacy, and the cultural addiction of its members, imprisons both individuals and the group itself in a box, the equivalent of a steel trap. Escape becomes almost unthinkable, and rarely occurs. Once a priest candidate commits to membership in the episcopal cult, he already feels, thinks, and behaves as the cult leader prescribes. And then the puppeteers take over. Not all is golden in the purple culture. 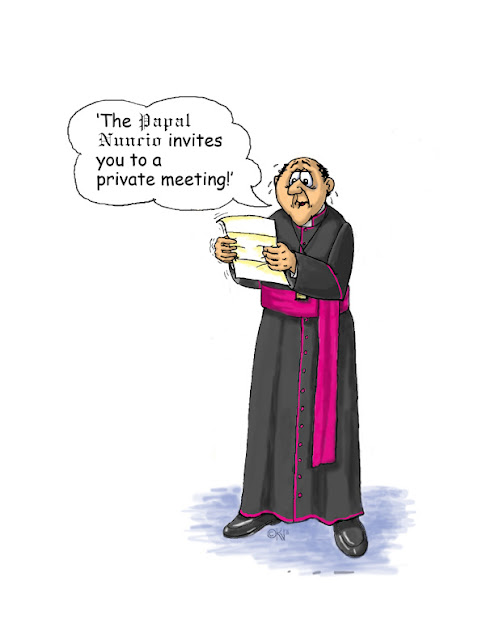