The Tide Begins to Turn: The Advance of Liberty, Equality and Democracy

nder the mantle of the French and American revolutions, the spirit of democracy, liberty, and equality captured the hearts and minds of the western world, never again to be smothered for long. Never again in the western world would the subjection of the masses be greeted with an apathetic acceptance. Never again would it have long-term staying power.

The Declaration of the Rights of Man and of the Citizen of 1789 defined liberty and equality: “Liberty consists of being able to do anything that does not harm others; thus the exercise of the natural rights of man or woman has no bounds other than those that guarantee other members of society the enjoyment of those same rights.” Liberty became further formulated as 1. Separation of Church and State. 2. Freedom of Conscience. 3. Freedom of Speech and 4. Freedom of the press.
Equality was defined: “The law must be the same for all, whether it protects or punishes. All citizens, being equal in its eyes, shall be equally eligible to all…employments according to their ability, and without other distinction than that of virtues and talents.”
Now, let’s trace the advance of liberty and equality, first in society at large and then in the Church.
In society, briefly: we can tie liberty and equality together when we talk of universal suffrage, the right of every individual to vote and select their leadership and to settle issues by vote, each vote equal in value. As history moved forward after the revolutions, voting became a right, but not for all at first. It was restricted in various ways: by sex (men only), by race (whites only), by property (only for property holders, etc.).
The advance toward universal suffrage was slow. By 1900, over a century after the French Revolution, there was still not a single democratic country with universal suffrage. One qualification or another got in the way. An analysis by Freedom House indicates that while no country had yet arrived to universal suffrage by 1900, by 2000, another century later, 120 of the world’s 192 nations, or 62% of them, had universal suffrage. Aristocrats are still around today in the western world, but mostly in their own little enclaves, where they talk to themselves and are looked upon as quaint relics of a bygone age or as flag substitutes. Politically, they are mostly impotent. 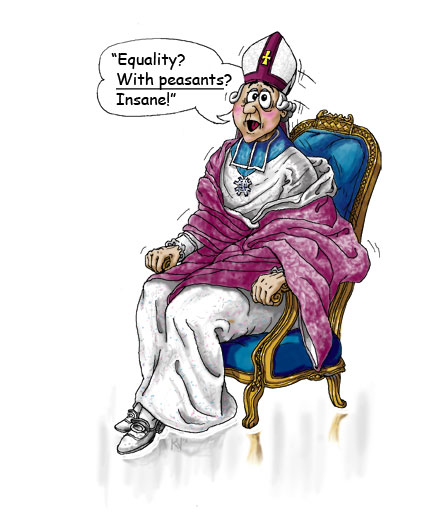 Next week, we will look at the bishop’s reaction to the revolutions and to their concepts of liberty and equality.
Posted by Stephen Boehrer at 12:01 AM 0 comments