Shoring Up the Purple Culture: The Church Turns Away From Equality

oday, we deal with the Bishops’ response to the question of equality within the Church. Have we returned as a Church to the egalitarian quality of the gospel and the first four centuries of church history? Obviously, no! Is the tinseled clerical aristocracy defunct as is the secular aristocracy? No again! Do the laity have a voice that is heard by the clerical aristocracy? Not at all, unless we reduce the level of conversation to what type of flowers should go on the altar for a particular feast, or to their listening to attorneys in the present sexual abuse crisis. Does the wisdom of the laity enter into declarations of appropriate moral behavior? No. It is not an exaggeration to say that our bishops today inhabit a purple culture that is as unheeding of the laity as the aristocratic culture of old was to its peasants.
As the monarchical world of secular aristocrats declined following the French and American Revolutions, the Vatican felt threatened. Along with its nostalgia for the monarchies that fell, it felt itself in jeopardy. The pope and bishops mounted steps to secure their status. Those steps went further than the condemnations decreed against the liberating forces.

At the insistence of Pope Pius IX, in July, 1870, the First Vatican Council, with its Declaration of Papal Infallibility, established a new monarchy, one of moral and doctrinal dominance. The Pope now had two monarchies, both absolutist, the Papal States and the newly defined Spiritual Kingdom. The possession of two kingdoms lasted only three months as the foreseen absorption of the Papal States into a united Italy occurred in September, 1870. Still, the Pope and bishops retained their newly formed kingdom. And this new spiritual kingdom maintained all of the aristocratic trappings of the old order. The Pope remained a king. Bishops were still princes. In sum, the clerical aristocratic structure and purple culture remained the same as it had been, and has to this day.
To support the legitimacy of this new kingdom the Vatican began to load the practice of Catholicism with images that subtly carried the message. A feast of Christ the King was established by Pius XI in 1925. The feast of the Queenship of Mary followed in 1954, established by Pius XII. Both feasts work subliminally to validate the aristocratic (purple) culture of the Church. It is difficult to believe that they foster the images of Jesus and Mary that we glean from Scripture.
The Pope and bishops continue to dub knights of various papal orders with all the pomp and ceremony of old. The liturgy remains today a visible celebration of aristocratic manners and style. In liturgical ceremonies we see the throne, the royal garb, the etiquette of bows, genuflections and kneeling, precious metal chalices and ciboriums, all taken from the aristocratic life style. There is, in fact, an ongoing effort to restore all changes to the liturgy made by the Second Vatican Council, especially a return to the Latin language, exclusive to the clerical kingdom.

Bishops of past centuries had wealth-producing constituencies and appointments. Today as well, bishops have virtually unlimited access to money. In recent times we have witnessed how easy it is for a bishop to reach into the till to cover personal peccadillos, to travel at will, and to live in luxurious abodes. And the laity have no way to give significant input into such expenditures. If bishops utilize lay boards, the members are handpicked by the bishops themselves. 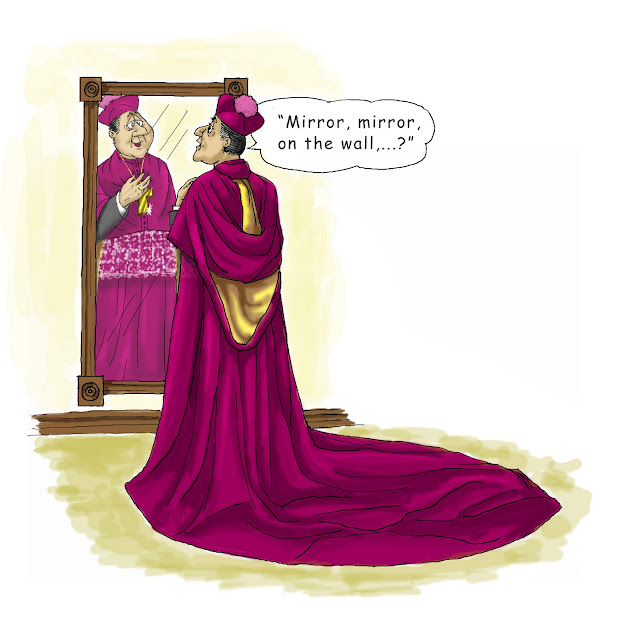 In the past issues of this blog we have seen the history of how and when the episcopacy took on the status consciousness and cultural lifestyle of the aristocracy. We have also seen the shallowness, narcissism, and cultic characteristics native to that culture. In the coming issues we will look at just how this culture has affected moral and doctrinal issues.
We hope you will stay with us.
Posted by Stephen Boehrer at 7:53 PM 1 comments