he Roman poet Ovid wrote of the tragic tale of Narcissus, son of the river god, Cephissus, and the nymph, Leiriope. Narcissus, handsome beyond imagination, rejected all who loved him. The nymph, Echo, lacking the ability to speak directly, was one of his rejects. Another reject, a young man, prayed that Narcissus would love only himself, Narcissus, forever. A goddess answered the prayer and arranged that Narcissus would stop at a spring to drink. Looking at his reflection in the water, he fell hopelessly in love with his own image. He was unable to free himself from his reflection in the water and gradually starved to death.


Narcissists have a fantasy life loaded with self-images that possess the heights of beauty, wisdom, love, power, success, etc. They believe themselves so special that only persons of equal grandeur can understand them.
Narcissists require huge amounts of admiration while, paradoxically, their self-esteem is very low. They need praise from others to give themselves a self. And they are very deft at extracting expressions of admiration from others. They feel entitled to special considerations and can be unreasonable in their demands for them. This sense of entitlement, like their grandiosity, does not depend on any external achievements on their part.
There is a great deal of envy in the narcissist. They become green with envy at the success of others and the applause given them. They feel applause belongs to them. They are lacking in empathy and show disdain for others.
We all begin life as narcissists. Most of us grow out of it in the daily give-and-take of family and school life. It is only lately that psychotherapists have realized that narcissism can be re-acquired. They give examples of various celebrities, doctors and the like. The experts refer to this circumstance as “acquired situational narcissism.”
Large groups of people can also acquire narcissism. Experts give the example of an elite military force. Members are indoctrinated as being special. They receive praise for their specialness. They wear the insignia of their specialness. They look upon themselves as warriors without peer, and dismiss the regular foot soldiers and the enemy as inferior. They acquire a sense of invulnerability. When shown to be vulnerable by those they dismiss as inferior, they often react with violence on the unprotected.
One can easily see the parallel between the military culture and that of the bishops.  In their cultural mindset theirs is the only intellectual capacity, theirs is the only moral authority, and protection of their aristocratic status is always a first consideration in their dictates.  They are ever ready to exclude and excommunicate to protect their voice and their status.  We hear them refer to their assembly as “the most exclusive club in the world.” 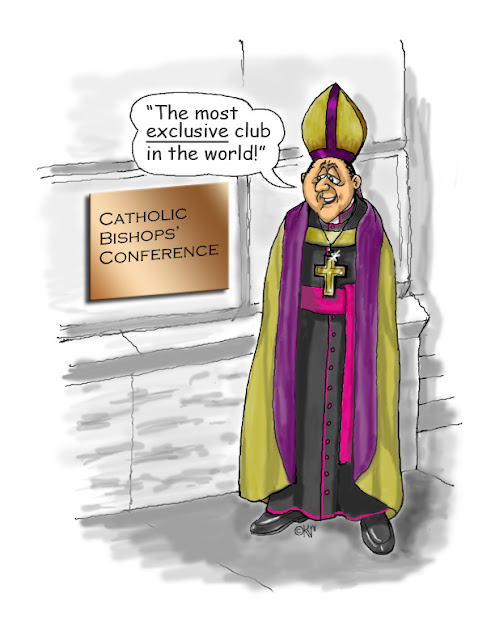