Jesus' Love: A Standard for the Purple Culture

e need to establish a standard before we go further, a standard by which we can measure the purple culture and the dictates that emanate from that culture.
I suspect that many of us older people have or had an image of God imprinted on us that saw God as an avenging, punishing, hellfire-threatening God. That God is dead. He/She does not exist and never did. Isn’t it some species of blasphemy to paint attributes on God that we would find unacceptable in our next door neighbor?
But how does a person look through the everyday tragedies that surround us and find a loving God? We all sense how difficult it must be for many people to find a God of love through a prism of pain, suffering and privation. I believe, however, if we listen quietly to our personal experience, we will find the measure we seek in Jesus.
Jesus was, in his life and in his dying, the revelation of the character of God. Jesus did not die on a cross to ransom us from a devil, as the metaphor of St. Paul would have it. Nor did Jesus die to satisfy some demand of justice on God’s part as retribution for Adam’s sin, as theologies from the eleventh century onward would posit. The sole mission that Jesus had was to show God to us, and our salvation flows from that.
Jesus was an intimate of God. He called God Abba (Daddy). He said to his apostle, Phillip, “If you see me, Phillip, you see the Father.”
What God is revealed when we study Jesus? He loved his neighbors, and they included the outcasts, the untouchables, the maimed, foreigners, prostitutes, rogues, tax collectors, and the invisible of his time, women. He healed anyone who needed healing. More important, he ate and drank with them. He lived at their level. He was one of them, an absolute egalitarian even with those at the bottom rung of society. For his efforts and for directing religious expression away from laws and ritual, he became a threat to the religious leaders of his time and to their privileged status. They had him killed. So, for loving others he died, and in dying showed the full passion of God for us.
It is not possible for a human to comprehend a love greater than that of one who lays down his or her life for others. But that is exactly what Jesus did in his living and in the dying his living led to. For speaking the truth, for naming the self-serving hypocrisy of religious leaders, he was killed. His death is as God-revealing as was his teaching. His death reveals a God who, in terms of human understanding, is someone who lays down his life for us. God is someone who loves each of us to the limit of our ability to understand what love is.
That’s the Gospel! That’s the Good News! That is the rock core of what Jesus was all about. 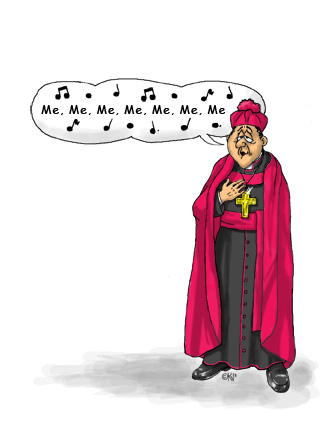