Aristocratic Trappings Alive and Well in the Church

n this issue we respond to the question:  Does the hierarchy today really retain the trappings of the aristocracy of old?  The answer of course is yes.  Still we should reassure ourselves that this is true.
Historians have determined that a papal court existed at least from the seventh century. It has possessed its full grandeur since the Renaissance in the fourteenth century. Pope Paul VI, in his Motu Proprio, Pontificalis Domus (1968),  reorganized the court. No longer called the papal court, the same entity is now subsumed under the titles Papal Household and Papal Chapel.
Prior to the issuance of the Motu Proprio, pontiffs regularly granted titles such as duke, marquis, count, and duchess to select lay people. An American woman received the title, duchess, from Pope Pius XII through the mediation of Cardinal Spellman. Today those former titles are no longer bestowed, though some individuals retain those previously awarded. Other titles such as Stewards of St. Peter and Gentlemen of His Holiness are now in use. Basically it is more a matter of titles than of substance.
Cardinals today still rank just below crown princes in the aristocratic alignment. They are thus given the appellation Your Eminence. Bishops, Their Excellencies, remain princes of the Church. Monsignor translates as My Lord.
Besides Gentlemen of His Holiness, the highest honor given a layman, there are a slew of papal knights: The Supreme Order of Christ, The Order of the Golden Spur, The Order of Pope Pius IX, The Order of St. Gregory the Great, The Equestrian Order of Pope St. Sylvester, etc. Knight Orders have corresponding “Dame” awards for women. Precedence governs all these awards as is evidenced in the order found in ceremonial processions. 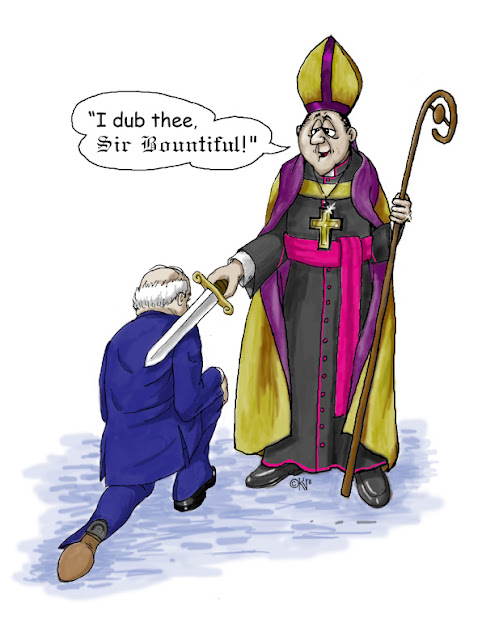 Aristocratic heraldry is alive and flourishing in the Church. Heraldry is described as “a celebration, based on ancient symbols, of the sense people have of themselves, personally and in groups.” One does not need to speculate on just who those persons and groups are.
Precedence, the pecking order, within the hierarchy is visibly displayed on their coats of arms. The color and number of tassels (fiocchi) on each coat of arms immediately tells the knowledgeable viewer what is the title and rank of the bearer.
In a prior issue of this blog, we touched on how the trappings of the aristocracy fill the liturgies of the Church.
Clearly, the purple culture is alive and thriving in the episcopacy.
Note: For any reader interested in observing the full extent of aristocratic trappings in the Church, we recommend leafing through The Church Visible – The Ceremonial Life andProtocol of the Roman Catholic Church by James-Charles Noonan Jr, 1996, Penguin Books.
Posted by Stephen Boehrer at 12:01 AM 0 comments