Religious Laws and the "Unclean" Jesus: A Heritage Neglected


fter revealing God as one who loves us unconditionally, Jesus invites us to love God in return by loving our neighbor, not to earn salvation, but to respond naturally to God’s great love.  “By this will all men know that you are my disciples, that you love one another.”  This law of love is attested to in all four gospels and in Paul. But, love of neighbor is not a command hurled at us from above. It is law only because, written in our hearts, it says: if you would be yourself, your best self, love your neighbor. Instinctively we know this to be true. Throughout all of our history mankind has recognized that the hero, the best anyone can be, is someone who puts his or her life on the line for others. True religious response to God calls for nothing more or less than putting ourselves on track to become our best selves. I can only show love to God by loving people.
BUT, WHAT IS LOVE? Jesus by his example, and philosophers like Plato, Socrates, and Aristotle define love for us. To love is to be for others for the other’s own sake.
We look to Jesus for our lived example. Jesus wanted to free people from religious laws, many of which were actual obstacles to loving. In the religious culture of Jesus’ time there existed a whole range of laws that covered nearly every moment of people’s daily lives. Should anyone violate one of these laws they were considered unclean. They required purification before they could again be considered clean and allowed once again to associate with the clean people. A lawbreaker was sent out, ostracized, kept out of law-abiding society until he or she had gone through the purification requirements.
Jesus broke these laws with total abandon. He violated the hugely important Sabbath laws. He defended his disciples for plucking and eating grain on the Sabbath. He healed people on the Sabbath. These were grave violations of the Sabbath law, and Jesus was unclean because of it.
There were laws about washing hands often each day, and laws about what you could or could not eat. Jesus summed up his response: “There is nothing outside a person that by going in can defile, but the things that come out are what defile.” He didn’t worry about these laws, and was unclean because of it.
In that culture you were not permitted to touch or associate with anyone considered unclean. Jesus did. He touched and healed the outcasts: lepers, the blind, the lame, a hemorrhaging woman. He ate and drank with the outcasts, the despised tax collectors, the wounded. And he was unclean because of it.
Jesus lived in a patriarchal society where women were practically invisible, or who left the men unclean by association. Jesus’ association and friendship with women made it clear that women were equals to men in His kingdom. And he was unclean because of it.
In the parable of the Good Samaritan, the priest and Levite didn’t walk past the wounded man because they were mean and uncaring. They walked past him because their laws said they would be unclean if they touched him. And, who did Jesus point out as being a good neighbor to the wounded man? A Samaritan, a foreigner, an unclean person.
For pointing out the unloving nature of their laws, the religious leaders eventually took their clean revenge and had Jesus killed.
Have you ever noticed that our bishops love laws whose only purpose is to control? 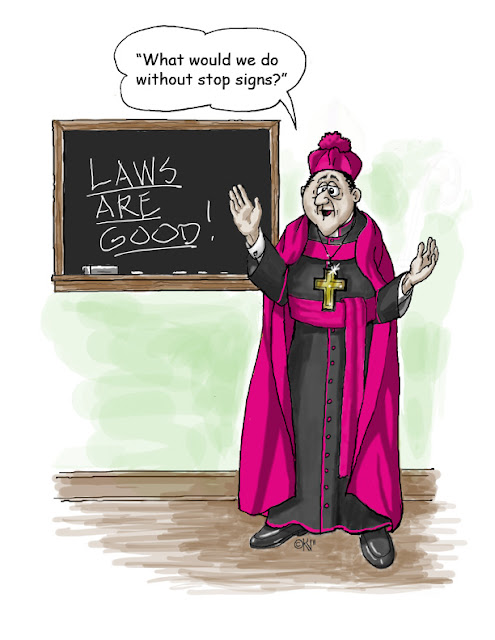 Resource: Meeting Jesus Again for the First Time by Marcus J. Borg. HarperCollins, 1995.
Posted by Stephen Boehrer at 12:01 AM 1 comments